Psychoanalysts have long been intrigued with how humans can have widely different interpretations of the same images. To analyze the thoughts of his patients, Swiss psychiatrist Hermann Rorschach popularized 100 years ago the technique of using inkblots which came to be known as the Rorschach test. This year’s volatility has provided a Rorschach test of sorts for investors trying to interpret data to make sense of the extraordinary movements in share prices. In this edition of Global Foresight, we look at several key issues, presenting the optimistic and pessimistic case for each, and then our own interpretations.

What makes this time especially challenging for investors is that never in history have forecasts been so divergent. For example, as of July 10, the range of real GDP growth in 2020 for the U.S. was from -9.1% to -0.6%, with a median forecast of -5.6%. It is rare to see such a large dispersion in forecasts, even in recessionary periods when the range of forecasts typically may be a few percent. The uncertainty around economic growth can be transposed to a variety of issues impacting the prospects for markets.

The current environment calls to mind a quote attributed to Warren Buffett, “Forecasts may tell you a great deal about the forecaster; they tell you nothing about the future.” This quote especially resonates in the wake of the July 2nd jobs report. Optimists interpreted the 4.8 million new jobs created, the best month of gains ever, as a sign of the strength and resilience of the U.S. economy. Pessimists pointed to 11.1% unemployment, which outside of the data posted in May and June, was the worst month since the 1930s.

Our view is to simply not place much credence in the current data which is too severely distorted to paint a true picture of the health of the economy and instead focus on the 2021 and 2022 outlook for jobs. The current median consensus forecast for 2021 unemployment rate is 7.5%, with a large range of 4.5% to 11.6%. If we extend horizons to 2022, the median unemployment forecast is 5.7%, a level last seen in 2015. Even if we assume a much faster recovery than the median forecast, it is very difficult to envision the unemployment rate returning to pre- Covid-19 levels of 3.5% before 2023.

Optimists point to well over 140 vaccines for Covid-19 in clinical trials, including a few in late-stage development. Pessimists point to the fact that many viruses such as malaria, dengue and HIV have stumped scientists for years in their efforts to find a safe, effective vaccine. We expect the scientific community’s herculean effort will bear fruit in the form of a vaccine or improved treatment. However, we believe it is unrealistic to expect production and mass distribution of a vaccine before early 2021. Between now and then, we expect authorities to use more locally targeted measures to confront outbreaks, including enforcing social distancing, mask wearing and curtailing activity in affected cities and towns. We do not expect wholesale lockdowns for states and countries like we saw this past spring. However, without a vaccine or treatment, we still believe the world’s economy will be somewhat impaired with leisure, tourism, business conferences and entertainment venues all impacted by social distancing.

Alphabet, Amazon, Apple, Facebook and Microsoft currently account for roughly 25% of the S&P 500 Index. They also represent the largest five constituents in the MSCI All-Country World Index, illustrating the global
dominance of U.S. companies, especially in technology and media platforms. Those five are as large by market capitalization as the next 30 largest companies combined in the S&P 500 Index. They are also as large as the smallest 376 companies in the S&P 500 Index. By any historic measure, the S&P 500 Index is incredibly concentrated. Optimists may see this as a sign of the strength of capitalism — that five relatively new companies, two created in the 1980s, two in the 1990s, and one in the 2000s, can grow from the venture capital stage to become world leading companies and the largest Index constituents in less than forty years. A pessimist may see unsustainable market concentration and dominance that has led to increased regulatory scrutiny.

These five companies have strong market positions, customer loyalty and balance sheet strength, but future returns are likely to slow from here for a few reasons: 1) compounding returns from their current size becomes very difficult — three of them have market capitalizations of over $1.5 trillion ranking – each about the size of the fourth largest country in the MSCI World All Country Index, 2) each pay at tax rates well below statutory rates and would likely be a target in a Biden administration for some form of minimum taxation, and 3) Alphabet and Facebook have already attracted a great deal of regulatory scrutiny as have Amazon and Apple, albeit to a lesser extent.

Our view aligns with the more pessimistic outlook – we see a second Trump administration as being far more punitive on global trade, while a Biden administration would likely push for higher corporate and capital gains tax rates. We have a hard time seeing how a balanced center emerges, but we hope to be proven wrong. We estimate a Biden corporate tax increase could shave at least 10% off the expected earnings of the S&P 500 Index next year.

Covid-19 has had a massive impact on European economic growth as the region is far more dependent on tourism and trade than is North America. The early days of the pandemic exposed some of the regional divisions within the European Union (EU), with unprecedented border closures to combat the spread of the virus. The pessimistic view that emerged in March was that the EU would not survive the pandemic as a political and economic union.

We have seen glimmers of hope from the despair of just a few months ago as the EU’s most fiscally conservative member, Germany, announced its own $150 billion fiscal stimulus. More significantly, Germany and France have pushed for a breakthrough $850 billion EU recovery fund. The fund would be the first to be jointly underwritten by all 27 members of the EU and thus needs unanimous agreement. The optimistic view would be that this fund gets approved at the EU summit in July, marking a new high point of unity within the EU. Additionally, it would be the first evidence of Europe becoming a true fiscal union as opposed to just having a currency and regulatory union. If this proposal fails to go through, it will reinforce euro-skeptics’ view that the European Union is an unsustainable political and economic structure.

Besides the sheer fiscal impact of this measure, it will speak volumes to the political future of the EU. We are optimistic that this deal gets done, but this is a crucial period for the EU to act. China and Hong Kong
China’s new security law for Hong Kong has raised tensions with the U.S. An optimistic take will be that President Trump may use strong language but will not take meaningful action ahead of the November U.S. election. A pessimistic take will be that Biden and Trump must position themselves to be tough on China. Our view is that trade with China will be tougher next year no matter who wins our presidential election, but that few punitive measures will be implemented before the November elections. This clearly bears close watching should there be any meaningful action ahead of November.

An optimist may view lower interest rates as supporting higher P/E multiples. The U.S. 10-year Treasury began 2020 yielding 1.92% and is currently yielding 0.62% (as of July 10). Pessimists could point to economic growth far below what was expected coming into 2020, cutting the outlook on S&P 500 aggregate earnings from $172 to $120. Our view is that we should extend our horizons to 2021, when corporate earnings should return to more normalized levels. Current consensus on next year’s S&P 500 earnings are $155 per share, placing valuations at 21x 2021 EPS. This valuation assumes no corporate tax increase, no trade wars, a widely available vaccine, and no regulatory action on some of the dominant tech companies. Rates may be low, but we believe there are inherent risks and headwinds to corporate earnings in 2021. We side with the case that valuations are ahead of themselves.

Yogi Berra once said, “It’s tough to make predictions, especially about the future”. This year compounds the usual economic uncertainties with the pandemic and, importantly, the response to it by authorities. The generous policies of the U.S. government have stabilized the consumer despite massive unemployment. Disposable personal income at the end of May was a remarkable 8% higher than it was just last December, in a span of time when the unemployment rate rose from 3.5% to 13.3%. An optimist may look favorably on how quickly the government stabilized the U.S. economy, yet a pessimist may point to the real pain of the downturn that will eventually be revealed when government support wanes.

Regardless of whether you are an optimist or pessimist, the reality is the U.S. faces a 2021 with much higher levels of federal debt because of the cost of this year’s economic stimulus. In 2020, the fiscal deficit is estimated to be a staggering 17% of GDP, a level surpassed only in 1943-1945, when we were fully engaged in the wartime effort. By comparison, in the worst year of the global financial crisis in 2009, we recorded a deficit to GDP of 9%. The U.S. economy has become far more dependent today on government support than it was during the global financial crisis. We can debate the effectiveness of wearing masks, but what remains unanswered is how sustainable the economy will be when the mask of government support is lifted. Until then, all we have is a muddled picture that surely Rorschach would admire.

Certain information contained in this document may constitute “forward-looking statements.” No representations or warranties are made as to the accuracy or completeness of such statements, and actual events or results may differ materially from those reflected or contemplated. This document is provided for informational purposes only and is not intended, and should not be construed, as investment, tax or legal advice. This document does not purport to be a complete statement of approaches, which may vary due to individual factors and circumstances. Company references are provided for illustrative purposes only and should not be construed as investment advice or a recommendation to purchase, sell or hold any security. Although the information provided is carefully reviewed, Rockefeller Capital Management cannot be held responsible for any direct or incidental loss resulting from applying any of the information provided. Past performance is no guarantee of future results and no investment or financial planning strategy can guarantee profit or protection against losses. These materials may not be reproduced or distributed without Rockefeller Capital Management’s prior written consent. 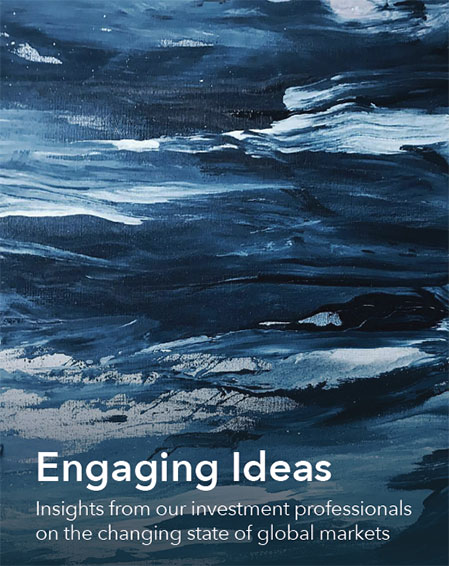 Engaging Ideas: Acceleration of Decarbonization Driven by the War in Ukraine
The outbreak of war in Ukraine has quickly galvanized the European Union’s commitment to reduce its reliance on Russian energy and accelerate its plans to increase the region’s renewable energy capacity. In this new commentary, we review the short- and long-term implications of this dynamic and the investment implications.
Explore
Download

That 70's Show
In this quarter’s edition of Global Foresight, we compare and contrast today’s macro environment with that of the 1970s.  That 70’s Show focuses on inflation from both eras due to overly accommodative central banks and supply shocks.   This issue also illustrates the stark differences in interest rates between the two periods, which made the 1970’s a uniquely difficult decade for investors.
Explore
Download
Client Relationship Brochure